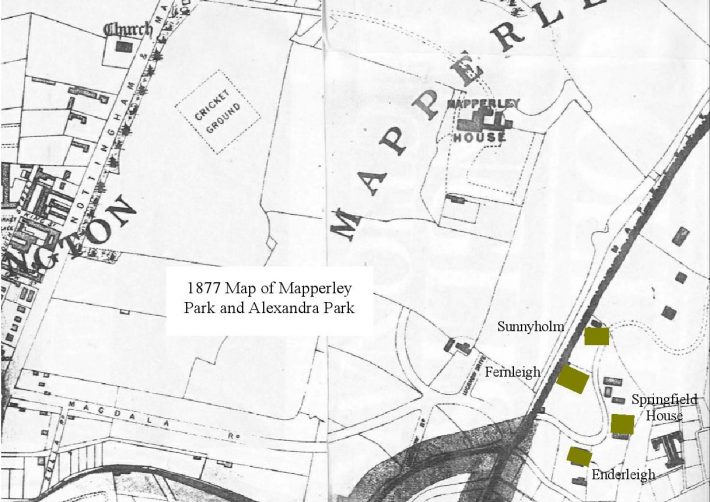 Alexandra Park is a small development of impressive houses off Woodborough Road, near to the junction with Magdala Road. The first properties were built in 1857 and the entrance to the estate was gated with a lodge. The winding road into the estate was originally called Park Drive, but was later changed to The Crescent. It was extended northwards in 1862, the extension being named Albert Road to commemorate Prince Albert’s death in December 1861. Originally the estate was confusingly called Mapperley Park but this was changed to Alexandra Park after 1871 to commemorate the marriage of Prince Edward to Princess Alexandra of Denmark. The naming of other roads in the area, such as Dagmar, Denmark, and Coberg, reflected the local popularity of the couple. They were invited to Nottingham in 1878, to open the Castle Museum & Art Gallery. Access remained an issue and by 1877, only a handful more houses had been built.

In 1886 Woodborough Road was lowered and levelled. There is still evidence of this in the high retaining sandstone walls that are still in place. During this work, traffic had to be diverted through Alexandra Park. The original lodge (then owned by William Farmer at Fernleigh) was damaged and had to be rebuilt. In 1901 there were only about 25 houses built in Alexandra Park, but the arrival of the electric trams on Woodborough Road accelerated development in the area. The Alexandra Park plots were all large and originally restricted to single family houses of a minimum rateable value of £40. All ‘trade, industrial premises and steam engines’ were prohibited. Most were self-made manufacturers or professionals, many were prominent in public life and connected through political, church or business relationships.

The first four houses were built in 1857. Here is their story.

Designed by T C Hine for his brother Benjamin Hornbuckle Hine, a wealthy hosiery manufacturer. In 1861, he was recorded there with his wife Mary,, his mother-in-law, four children and an adopted destitute orphan named Emma Woodhead. They had five servants, including a governess and a monthly nurse. The family remained there until 1873.

From 1876 to 1900 it was the home of John Turney (of Turney Bros, Trent Bridge Leather Works). Turney was a member of the Council for 23 years, became Sheriff in 1878, Mayor in 1886-8, and was knighted in 1890. He was a director and chairman of many companies including Raleigh Cycles. He later moved to Gedling House in Gedling.

John Turney married his first wife in 1865 but she died the following year. He remarried and had nine children. In 1881, he was recorded as a leather manufacturer employing 300 people. He lived at Springfield his large family, a governess and four servants. In 1891, as well as 4 house-servants, the family have a resident gardener named Thomas Beeton.

From 1900 to 1934 Springfield was occupied by Sir Arthur William Black, of lace manufacturers Jacques, Black & Co Ltd. He also was an MP, JP, Sheriff and Mayor, and one of the founders of the Albert Hall Wesleyan Mission.

Arthur Black gave Springfield to the National Children’s Homes in 1934. It opened as a boys home in 1935, joined by girls in 1967. It closed in 1982 and has now been converted into apartments.

T C Hine designed Enderleigh for his brother John Green Hine, but he never lived there.

In 1861 it was occupied by Daniel Underwood, a 49 yr old cigar manufacturer and tobacconist in Pelham Street, Nottingham. He lived there with his wife Elizabeth, five children, and two servants.

In 1881, Enderleigh was occupied by William Hutchinson Farmer, who moved from Alexander Street off Sherwood Rise. He owned a lace factory in North Sherwood Street and was managing director of the Midland Lace Company, employing 600 workers.  He lived at Enderleigh with his wife Jane, three sons, and 3 servants.

From 1887 to 1895 Enderleigh was occupied by George Creassey, a lace manufacturer from East Retford. In the 1891 census, age 61, he was living with his wife and three unmarried grown-up sons, a farm agent, a lace designer, and a solicitor’s articled clerk. There was an unrelated elderly widow who lived with them and they had one servant. In May 1895, George Creassey died tragically whilst lighting a gas chandelier in the drawing room of the house. There was an explosion and this set his dressing gown on fire. He died a few days later.

In 1901, Thomas Mason, a 57 year old manufacturing chemist lived at Enderleigh with his wife, two middle-aged spinsters from Southampton, and a couple of servants. Directories show he was still there on 1908 and his widow still there in 1915.

The Gordon Boys Home closed December 1965 and Enderleigh was sold for £1800. The City Council Children’s Department used it as a home for female juvenile offenders, and from 1971 the Social Services Department used it as an Intermediate Treatment Centre for juvenile offenders. It became surplus to requirements, probably in the late 1980s, and stood empty for many years. In 2016, the site was cleared and developed as a private and gated community named Enderleigh Mews.

Designed by T C Hine for William Windley, a silk trader with a company Windley and Barwick, which employed 385 people. Windley had bought the land (10,449 sq yds) in 1854 from John Hine for £767. In 1861, Windley was living at Fernleigh with his four children, four resident servants, a groom and a 13 year old labourer named William Sissons.

In 1863, Windley purchased more land on the southern side of The Crescent that he used as a kitchen garden. He also purchased a substantial piece of land on the opposite side of Woodborough Road from the Wright family at Mapperley Hall. This land later became the site of some very substantial houses including Beechwood and Park House. Beechwood later became another Childrens Home before being finally demolished recently and there is a new housing development on the site.

Windley was a staunch Conservative and supporter of the Anglican Church. He was involved with the building of All Saints Church and was a substantial benefactor of St Andrew’s and St Jude’s Churches in Mapperley. He died in 1877 after a short illness, and was buried at All Saints Church. His widow continued to live at Fernleigh with some of the family, before moving to a more modest house at 30 Waterloo Road. She died in 1884.

In 1885 Fernleigh (and the lodge and the land south of The Crescent) were sold for £5800 to William Farmer. William Farmer and his neighbour John Turney at Springfield, were Liberal supporters. Farmer was president of East Nottingham Liberal Association and the founding president of the Nottingham Gladstone Club. When William Gladstone visitied Nottingham in 1887, the Turneys entertained him at Springfield while the Farmers at Fernleigh entertained some of his entourage, including the Marquis of Ripon, who later became a government minister.

In 1891, Farmer was still living at Fernleigh with his wife and five children. His three sons had all followed their father into lace manufacturing, when the industry was declining and in recession. The financial pressures on William Farmer were too great and in December 1894 he resigned as Managing Director of the Midland Lace Company on Stoney Street. On a Sunday night he went into the office and committed suicide by shooting himself.

Fernleigh was later sold at the knock down price of £4,000 to John Dane Player, son of the late John Player and his tobacco business. John Player senior had died in 1884, but had stipulated that his two sons could not inherit the firm until 1891 when they were both aged 25. In 1895 the brothers made the firm a limited company and with the proceeds they were both able to buy a prestigious home. John Dane Player delayed moving in for three years while Arthur Marshall altered and extended it, adding the present tile-cladding. Arthur Marshall also designed the stable and carriage house (the turreted building on Fernleigh’s kitchen garden on the south side of The Crescent, fronting Woodborough Road.

John and Margaret Player settled at Fernleigh. They did not have children and remained there for the rest of their lives. Margaret died in 1949 and John placed a magnificent alabaster memorial in St Andrew’s church. The following year John died aged 86, leaving an estate of £2.5 million.

John Player was benefactor of the Nottingham Children’s Hospital that had moved from Postern Street into Forest House in Mapperley Park (in 1900) and remained there until it was absorbed into University Hospital in 1974. The hospital records show that John Dane Player (who retired from the tobacco firm in 1926) was a trustee of the hospital and gave a total of £50,000 to extend it. He served on the management committee, attending weekly meetings and visited the children almost daily for the rest of his life. He was totally opposed to the newly-created NHS taking over the hospital in 1948.

In 1950 Nottingham Corporation bought Fernleigh. The Welfare Department used it as a home for old people. In 1960, the former kitchen garden was used to build Alexandra Court, the modern block of flats at the entrance to The Crescent off Woodborough Road.

In 1971 Fernleigh was passed to the newly created Social Services Department and, on local government reorganisation in 1974, it passed to the County Council. It has been leased to The Nottinghamshire Hospice since 1980.

In 1861, the first resident was Thomas Woodhouse, a lace manufacturer. He lived at Sunnyholm with his wife, five daughters, one son, and three servants.

From 1868 to 1877 it was occupied by Edward Turney of the Turney Bros Leather Works on Trent Bridge, whose brother was also at Springfield. Edward also had leather works in Basford. He lived there with his wife, three children and one servant.

It is unclear who lived in Sunnyholm from then until 1901, when it was occupied by Arthur Durose, a chartered accountant with Hubbart & Durose. He was there with his wife and two children until 1908.

It is not clear who else may have lived there before Sunnyholme became a Probation Hostel and was renamed Trent House.

We are grateful for the previous research of the http://mapperleyandsherwoodhistorygroup.co.uk/ in preparing the text of this article.