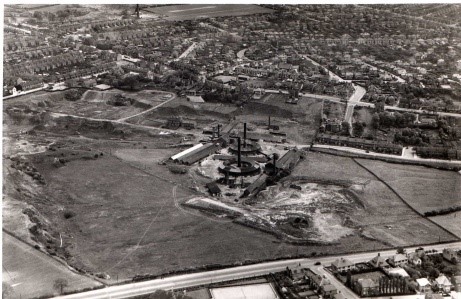 St Pancras Station celebrated its 150 year history in 2019, and we celebrate the Mapperley Bricks that were used to build it. Mapperley is central to the brick-making heritage of Nottingham

Many thanks to Mike Chapman of the British Brick Society for the following information.

The Victorian Age ushered in the Industrial Revolution, which required vast schemes of mills, factories, housing to provide for the new ideas of mass production and to cope with the influx of people required to work and live. These schemes developed on a scale never before seen in the country, also required equally huge civil engineering schemes to provide the services, such as clean water and effective sewage disposal, and fast and reliable transport links. Whilst a local canal network had been in place for many years, Nottingham benefited from connection to the national railway network giving access to both freight and passenger services across the country

Whilst the use of brick in construction had already been well established, the Victorians saw brick as the building material of choice, with the advantages of versatility, supply and cost over other materials such as stone and timber.

Supply and cost, as today, were major considerations in any building project, and for those two factors to be met, then vast amounts of bricks had to be available from local manufacturers. For the establishment of local brickworks then suitable and sufficient supplies of clay, the basic raw material in the brickmaking process, had to be easily available. In this respect, the area now covered by Gedling Borough had a very significant advantage. The geology of the area includes large deposits of Keuper Marl, which is clay that is reasonably easy to extract and ideal for the large scale production of high quality bricks. Another factor in the establishment of the industry was a good supply of hard working people and local coal, the latter being essential for the “firing” of brick to transform the clay into a durable building material

These vital clay deposits are found all along the “Mapperley Ridge Line “stretching from Carlton Square up Carlton Hill, through Mapperley and on to Dorket Head. Prior to the Industrial Revolution, brickmaking, based on the Keuper Marl, was well established, albeit based on a number of small family owned businesses supplying local needs, and in many cases only working through the Spring and Summer seasons and all reliant on the humble horse and cart for either local delivery (approximately carrying 250 bricks, or onward to a canal wharf for loading onto a barge with a capacity of about 10,000 bricks.

Evidence for these activities is recorded along both sides of Carlton Hill, Woodborough Road into Mapperley Plains, and to Dorket Head, the latter still the site of a large and important “brick factory”. A good example of the “evidence “is the Honey wood Estate built on the site of the former Thorneywood Brickworks, which closed in the early 1960s

For the voracious appetite of the numerous building projects in the whole area, the capacity of the local brick industry had to be massively increased. This was largely facilitated by the repeal in 1850 of a much hated tax on bricks, the Brick Tax and by the rise of a new breed of engineers and businessmen, the typical Victorian  Entrepreneurs who saw the opportunities and established new large scale brickmaking facilities, run as companies instead of a collection of small family businesses, and in this respect the local brickmaking industry that was established exactly mirrored what was happening throughout the country as the Industrial Revolution gathered pace.

A number of such brick companies were formed, after the 1850s, financed by local investors, which in turn enabled large areas of clay bearing land to be purchased, together with new manufacturing techniques ultimately capable of producing millions of brick per year

Many of these new techniques in brick making were revolutionary enabling the mass production of high quality bricks at low cost, exactly what was required to satisfy the needs of the market and provide secure employment and a good return on investment from the company’s shareholders

Apart from the Carlton area, Mapperley and Dorket Head were recognised as having large and relatively easily worked supplies of Keuper Marl, and new works were established.

A number of limited companies were formed by groups of brickmaking engineers and investors, some of whom had already gained experience in the operation of smaller brickworks, and now keen to establish much larger concerns

Catalogue for another large company, founded by a group of Nottingham builders, finally closing in the late 1950s,and Mar Hill yard, owned by a Mr Morris and located near Carlton Square, and Bulwell Brick Company’s works located on the Wells Road, and now a housing development

The history of this company is worth recording in that it was established in 1867 by William Burgass, a local Brickmakers and coal merchant from Carlton, and Edward Gripper, originally an Essex farmer, who had already prior to this date established a large works at Mapperley and was already supplying bricks to the Midland Railway for their St Pancras Station terminus Grippers company and then Nottingham Patent Brick Co. would ultimately supply some 60 million bricks to this project. This company acquired the patent for a revolutionary type of kiln in which the bricks were fired. This kiln, called a Hoffmann Kiln, after its inventor, enabled the continuous firing of bricks and resulted in massive improvements in brick quality ,and coal use, and ultimately cost of production, all giving huge advantage over the previous “intermittent” type of kiln in common use prior to Hoffmann’s invention. The continuous design of the Hoffmann Kiln enabled the whole brick making process to be revolutionised, laying the foundations for the highly automated process of today, with the origins of all this firmly rooted in Gedling Borough

The Nottingham Patent Brick Company was a very successful business, acquiring the Dorket Head works of Messrs. Robinson and Sykes in 1897. The company continuing to invest by securing further clay supplies and updating the brick-making process.

Brickworks at Mapperley between Woodthorpe Road and Mapperley Rise. The round structures, with a central chimney are the original Hoffman Kilns used by Nottingham Patent Brick, one of which was in continuous use from 1868 to 1965

The business was also helped by the construction of the much needed Nottingham Suburban Railway, opened in1889 and running from the Trent Lane junction on the Great Northern Railway’s, GNR, Nottingham to Grantham route, through Thorneywood , St Ann’s Well and Daybrook to again connect to the GNR’s Derbyshire Extension route. This line enabled sidings to be built to both the works at Thorneywood and Mapperley, with connections to several main lines around Nottingham. Coal for firing the kilns and finished bricks could now be transported more easily and cheaply to markets around the country. London was a prime market for the company’s products, with large numbers of bricks being used to construct the Capital’s sewer system, all still in use today

This line also allowed a siding to be built to connect to the Nottingham Builders Brick Company works located adjacent to the junction of Porchester Road and Carlton Hill. This particular works closed in the late 1950s

By the 1960s the clay supplies for the works at Carlton and Mapperley had become exhausted, and the company focussed its operations at Dorket Head. Additional clay supplies adjacent to the works were acquired and in 1963 a new “brick factory” was constructed based upon yet another revolution in kiln technology, the continuous “tunnel kiln”. So successful was this that further expansion took place into the 1970s and 80s.

In recognition of its importance, the then Nottingham Brick PLC business was acquired by the Marley Company and through further industry consolidation is now owned by Ibstock PLC, the largest brick manufacturer in the UK. The factory is one of the most modern and highly productive plants in the country, providing local employment across the Borough, and supplying bricks for both local and national housebuilding schemes .A truly local enterprise, supplying a national need and something for which Gedling Borough is rightly proud of.

The Story of the Nottingham Suburban Railway by David G Birch

Clay Stealers to St Pancras Station by Jeffrey A Sheard