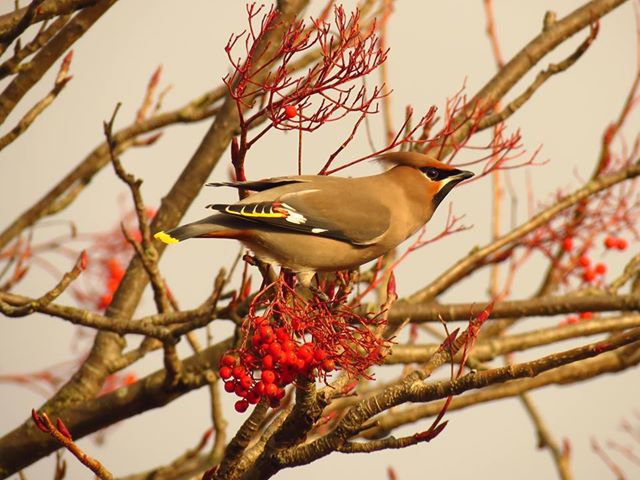 This Waxwing was seen in Sherwood at the Winchester Street car park this morning (21st Jan) at around 11.30. Gill, the photographer using a Canon SX60 bridge camera waited patiently for the sun to come out. Then it happened.

Waxwings in our area very rare. They only visit the UK in the winter, spending their breeding season in the boreal forest belt that stretches from Scandinavia, through Russia and across parts of North America. The numbers that reach us depend on the availability of berries on the continent. In years where the abundance of berries is low, birds have to move away to find food elsewhere.

As the winter movements of waxwings are dependent on the amount of food available on the other side of the North Sea, the UK can receive anything from a few dozen individuals to as many as 12,000 each year. Most years we attract at least a few birds and they usually arrive from October and can be seen up until April.

Some years they come, some they don’t. It’s depended on the crop of berries in Scandinavia. If the crop fails they come further afield looking particularly for rowan tree berries.


Waxwings are often seen in urban areas such as supermarket car parks where ornamental berry-bearing shrubs are planted.