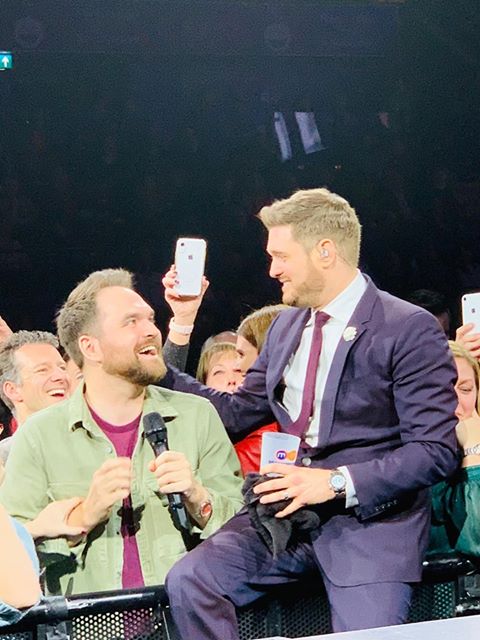 Despite the attention of national media, two Mapperley residents and followers of Mapperley People contacted us about an impromptu duet at Michael Buble’s recent concert in Nottingham.

Mark Bainbridge joined Buble on stage and even shared his drink with him, although Buble thought the cider was wine.

Michael asked if anybody in the audience had ever fancied singing in front of 15,000 people and I happened to be pretty close to the front so I put my hand up straight away and he spotted me. We sang a cover of a Matt Monro song called “My Kind of Girl” which Bublé did on one of his previous albums. He was so friendly and made me feel totally relaxed- I almost forgot there were 15,000 people watching! Such a nice bloke. He was even drinking my Cider, and laughing and joking around with me. We had a bit of a laugh when I corrected him on the lyrics that he’d forgotten he’d changed to bring the song more up to date. An amazing moment that I’ll never forget, and will treasure forever. The Matt Monro song was one me and my late Grandad used to sing in the car when I was a kid so a really special moment for my family too.

We were then contacted by Sophie, another regular contributor to Mapperley People. Sophie took these photographs of the occasion.