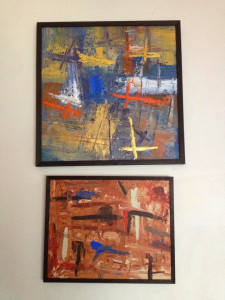 Mapperley has an artist who can draw on a wealth of experience and ideas to inspire him as he embarks on a new career as an abstract artist. His latest exhibition is at Expresso Gallery on Friday 4th May.

Creative people have something extra in their psyche; something in their blood that gives them an enhanced sense of taste, smell, hearing or sight. Dependent on our childhood experiences and the stimulus that we were presented with, this enhanced perception can lead us into particular lifestyles or it can lay dormant in our adult life, subdued by our responsibilities to an employer or other master. What is also evident is that once an individual’s creativity is released, it is further enhanced by mood and emotion. Financial reward does not drive these creative individuals and in most cases, neither does fame.

Nottingham is a creative and rebellious city. It has an area signposted with the name ‘Creative Quarter’. It is unlikely that an area will be designated the name Rebellious Quarter. That would be dangerous. The rebels within our midst need to challenge authority individually, otherwise we would have chaos.

Mapperley’s Pedro Perez  was born in Nottingham to Spanish and Swiss parents who, as teachers had met in Great Malvern then settled in Nottingham. His father Francisco taught at Trent Polytechnic and latterly other colleges in Nottingham. Francisco Perez had studied philosophy, history and art in post war Madrid. A bright ‘free thinker’ he travelled and immersed himself in the art-world, developing a network of artist friends around Europe. Whilst Francisco has never painted, his appreciation of art made him connections with artists such as Goya and Manuel Ortega in Spain, to locally renowned artists such as Paul Gidley and Maggie Campbell. Pedro had an older sister and both were allowed to follow their own choices academically. Pedro attended Nottingham’s Beckett School and chose art as one of his GCSE’s. His older sister Teresa was a talented photographer having studied it at degree level at Westminster University. Unfortunately the Perez family suffered two tragic events during Pedro’s childhood. The death of his mother then the death of Teresa after a long illness. No-one knows where Teresa’s photography may have taken her, and equally her death may well have affected Pedro’s artistic aspirations. Distracted by the emotion of bereavement he moved on slowly, leaving school to work on a number of projects, mainly in music as a DJ. Pedro as a painter and artist laid dormant for almost 20 years. Now in his 30’s he has discovered the urge to paint again. Living near to and caring for his elderly father, he has found inspiration at the house where he grew up surrounded by European art, books, language and family grief. Pedro explains that he did not have a TV until the age of 12 and his learning was from books and pictures. Using his father’s house as a studio he produces individual pieces of abstract art where colour, pattern and textures are made using acrylics and oils. Only recently picking up a brush, he usually improvises with anything that creates the desired effect. He uses neither pallet nor easel. At the moment each piece of work remains unique and, contrary to advice he has decided not to produce prints of his work. I asked Pedro if this represented a rebellious side to him. He thinks not. On the contrary, Pedro sees himself as moving forward in a positive way. Using the emotions of the past he has also created a 3D sculpture using items personal to the family and his sister Teresa. When his father saw the 3D sculpture he likened it to the Art Povera style and gave it his blessing. It is not only Pedro’s father who likes his work. Pedro has produced pieces recently for buyers as far afield as Madrid and Yorkshire. As he moves forward, and creates more pieces of art, Nottingham’s walls may well find space for the work of Pedro Perez. 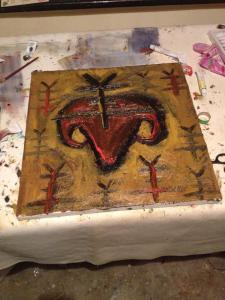