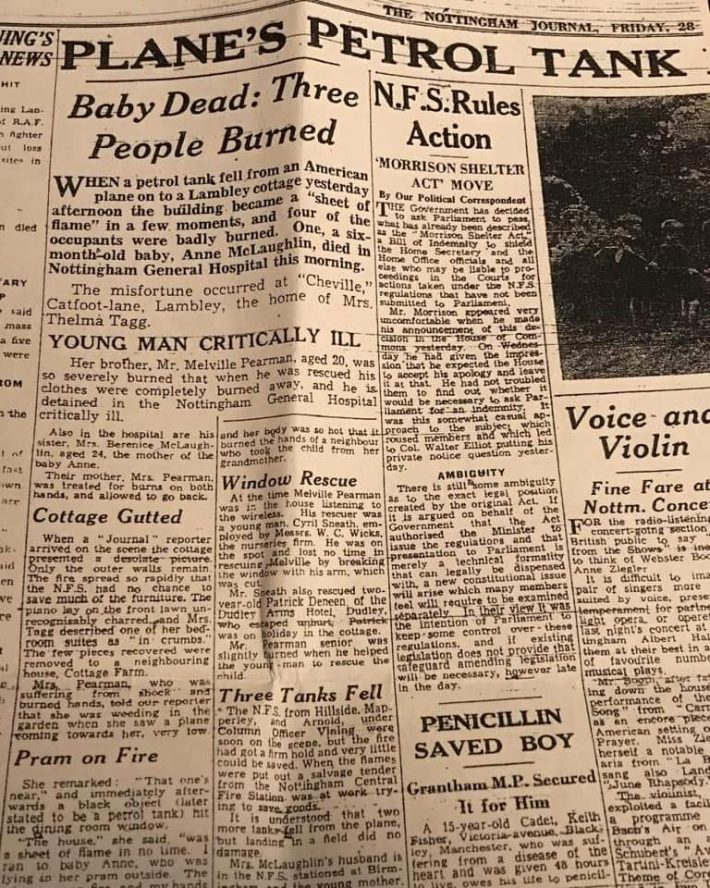 Nottinghamshire is home to more than 20 memorials dedicated to aircrew who died during the Second World War. The details of these are found on various publications and websites. Memorials such as those in Annesley, Blyth, Calverton, Cotgrave, Farnsfield, Gonalston, Halam, and Hoveringham.

However, one incident involving a military aircraft is more of a mystery.

It occurred on Catfoot Lane, off Mapperley Plains, and involves the tragic death of 20 year old Melville Pearman and his baby niece, named Anne McLaughlin. Melville died within a day or so of the incident.

On 27th July 1944, the Pearman family house was destroyed by fire. It is known that an American P47 fighter aircraft was flying very low and jettisoned a number of fuel tanks, one of them landing on the house. What is not known is where these aircraft had flown from and were heading to.

Thanks to a relative of the family, we have copies of the newspaper article at the time. The Nottingham Journal reported on the incident the day after.

Here is a transcript:

When a petrol tank fell from an American plane on to a Lambley Cottage yesterday afternoon, the building became a ‘sheet of flame’ in a few moments, and four of the occupants were badly burned. One a six month old baby, Anne McLaughlin, died in Nottingham General Hospital this morning.

Her brother, Mr Melville Pearman, aged 20, was so severely burned when he was rescued his clothes were completely burned away, and he is detained in the Nottingham General Hospital, critically ill.

Also in the hospital are his sister, Mrs Berenice McLaughlin, aged 24, the mother of the baby Anne. Their mother, Mrs Pearman, was treated for burns on both hands and allowed to go back.

When a Journal reporter arrived on the scene, the cottage presented a desolate picture. Only the outer walls remain. The fire spread so rapidly that the NFS had no chance to save much of the furniture. The piano lay on the front lawn unrecognisably charred and Mrs Tagg described one of her bedroom suites as ‘in crumbs’. The few pieces recovered were removed to a neighbouring house, Cottage Farm.

Mrs Pearman who was suffering from shock and burned hands, told our reporter that she was

She remarked: “That one’s near,” and immediately afterwards a black object (later stated to be a petrol tank) hit the dining room window.

“The house,” she said, “was a sheet of flame in no time. I ran to baby Anne, who was lying in her pram outside. The pram was on fire and my hands and her body was so hot that it burned the hands of a neighbour who took the child from her grandmother.

At the time Melville Pearman was in the house listening to the wireless. His rescuer was a young man, Cyril Sneath, employed by Messrs. W.C Wicks the nurseries frim. He was on the spot and lost no time in rescuing Melville by breaking the window with his arm, which was cut.

Mr Pearman senior was slightly burned when he helped the young man to rescue the child.

The N.F.S from Hillside, Mapperley, and Arnold, under Column Officer Vining were soon on the scene, but the fire had got a firm hold and very little could be saved. When the flames were put out a salvage tender from the Nottingham Central Fire Station was at work trying to save goods.

It is understood that two more tanks fell from the plane, but landing in a field did no damage.

Mrs McLaughlin’s husband is in the N.F.S. stationed at Birmingham.

It is not known what was recorded at the inquest into the deaths, however in 2019 the incident was discussed in an online forum for the US Airforce:

Incident. Mrs Clara Pearman (of Thelville, Catfoot Lane) stated two aircraft skimmed the house, one grazed the chimney. She did not see it strike the chimney pot but it was found later displaced. She saw an object drop from the left wing and enter the house through the dining room window. The thing went woof and the house was ablaze. Mrs Pearman stated the flames came out the window onto Ann’s baby carriage which was outside the window. An American airman who was one of the pilots denied they were low enough to hit a chimney pot. A second pilot said he had jettisoned his auxiliary fuel tanks as he had engine trouble which caused him to lose height. The engine trouble ceased after the tanks were jettisoned.

The forum did not indicate that records of the incident were available, but the following was mentioned in relation to the aircraft, claimed to be a USAAF P47:

‘Most/all of the Fighter Groups were based further to the east, many around Ipswich for example. Thus for three (or four) fighters to be flying with drop tanks near Lambley, I would think it was possibly a training mission or a ferry flight, maybe from a depot in N. Ireland or some other northern location. If it was a ferry flight, the planes would probably not have been assigned/registered to a group yet, so searching in Fighter Group records may be useless. I don’t know if the pilots would have been ferry pilots or if a fighter group would send men from the group ‘up north’ to fly the planes back (and would a ferry flight from N. Ireland even need drop tanks?)’.

What is for certain, is that the Pearman family and the people of Catfoot Lane were subjected to a wartime tragedy that they would never forget.

On the 17th November, the London Gazette reported that Cyril Sneath (the man who rescued people from the burning building) was commended for his bravery:

CENTRAL CHANCERY OF THE ORDERS OF KNIGHTHOOD. St. James’s Palace, 21st November 1944. The King has been graciously pleased to give orders for the publication in the London Gazette of the names of the persons specially shown below as having received an expression of Commendation for their brave conduct: