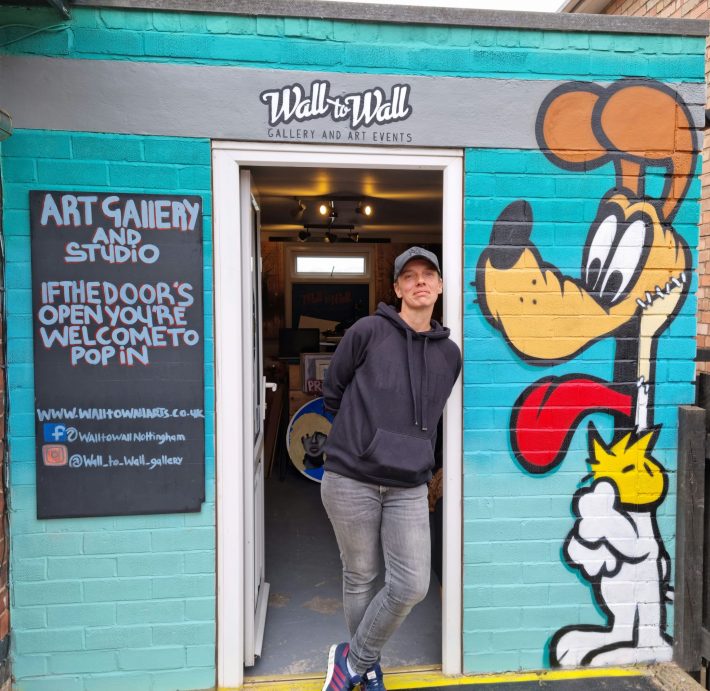 Curious about modern art and the pop-art style but not sure what style you prefer? Then Wall to Wall is a great place to start.

Wall to Wall is an independent micro-gallery nestled in suburban Nottingham, on the edge of Carlton, Bakersfield and Colwick.

Pop-art emerged in the UK during the 1950s. The movement presented a challenge to traditions of fine art by including imagery from popular and mass culture, such as advertising, comic books and mass-produced objects.

The aim of Wall to Wall is to champion artists from the local area and further afield. There is a healthy emphasis on diversity of styles, skills and artistic voice.

Wall to Wall is run by artists, for artists and makes it accessible to us.

Kelly is a self-taught mixed media artist. She has achieved a modest degree of success from the portraits she makes from recycled drinks cans. Kelly will often depict people who have themselves had struggles with substance abuse.

One of several artists featuring at the gallery is Kid30, whose recent body of work has focused on mashing up cartoon characters both current and from his childhood.

“Growing up in the 80’s with no TV, I was always a bit unsure as to which cartoon characters were which and what cartoons they were from, often finding myself pretending I had watched shows when I actually had no idea what they were.”

Take a look at what is happening and get in touch.